Angkor Wat Apsara and Devata : Khmer women in divine context is a rich and well researched online resource dedicated to the women of the Khmer Empire (9th-15th century). Being great builders, the Khmer filled the landscape with monumental temples, huge reservoirs and canals, and laid an extensive network of roads with bridges. Angkor Wat is the best known and most stunning temple. It is, in fact, a microcosm of the Hindu universe. Covering 200 hectares it is the world’s largest religious complex. Its construction was started by the Khmer king Suryavarman II around 1122 CE and took some 30 years to complete. The walls of Angkor Wat house a royal portrait gallery with 1,795 women realistically rendered in stone. Although the temple complex has been researched extensively in terms of architecture, art and archaeology, not much is known about these women.

Women and folktales project in Laos

Women are important storytellers and bearers of cultural heritage in Laos. However, their voices are rarely heard outside their communities, due to their traditional homebound responsibilities and their lack of confidence in participating in public forums. At the same time, traditional folktales and legends are in danger of dying out, as an older generation passes on and young people prefer entertainment from television and the internet.

With this in mind, the Luang Prabang Film Festival and the Traditional Arts and Ethnology Centre launched the Women and Folktales Project to empower ethnic minority women in Laos and document and disseminate traditional stories using film.

Funded by the US Embassy Vientiane, the project filmed seven women, from Hmong, Kmhmu, and Tai Lue villages around Luang Prabang Province, recounting 19 traditional folktales in their native languages. These films were translated into Lao and English, subtitled, and are now archived within the digital libraries…

Grabbing the Blue Tiger : The Past and Future of Northern Khmer Musical Arts
Length: 00:29:28
Language: Northern Khmer with English subtitles
Year of production: 2013

This film by Chaimongkol Chalermsukjitsri and Peter Vail documents traditional kandrim, an art form among Khmer speakers in northeastern Thailand. Kandrim features the extemporaneous production of lyrics connected to traditional meters and is regarded by its practitioners as a vital component of Northern Khmer heritage. The focus on kandrim reveals a high degree of ambivalence about the connection between literacy and heritage among Northern Khmer speakers.

The documentary is one of many research projects  of the Culture and Rights Project of the Princess Maha Chakri Sirindhorn Anthropology Centre in Bangkok. Latest news from the project can be found on their homepage.

The story of story in South Asia

The Story of Story in South Asia is a project aiming to explore the shared elements in the narratives of Buddhist, Jain and Brahmanical Hindu traditions.

The research aims to explore the role of story in the shaping of religious ideology in early South Asia, showing how Hindus, Buddhists and Jains used story to present and contest their ideas of self and other, and past, present and future. It will also consider how certain generic characters, such as the king or the sage, suggest points of contact between these religions.

The project is a joint venture between Cardiff University and the University of Edinburgh running from January 2013 to the end of 2015.

The three-year project will culminate in story-telling events in Cardiff and Edinburgh, a new book based on the project’s findings and various academic articles and papers to be shared among the academic community globally. We will also be convening a panel at a major international conference in order to raise awareness and critical discussion of our research theme amongst other scholars. There are also plans for a television documentary series that will explore how story has impacted on our past and on the modern world with an emphasis on South Asia and its diaspora.

Auguste Pavie (1847—1925) was the French explorer and diplomat, who is best known for his explorations of the Upper Mekong Valley and for playing a major role in bringing the kingdoms of Laos under French control.

Pavie went to Cochinchina (now part of southern Vietnam) as a sergeant in the marines in 1869 and subsequently worked in the Post and Telegraphic Department, directing construction of telegraph lines between Phnom Penh, the Cambodian capital, and Bangkok in 1879 and another between Phnom Penh and Saigon (now Ho Chi Minh City) in 1882. While working on the telegraph lines, he travelled throughout Siam, Cambodia, and Vietnam and gained an intimate knowledge of each country’s customs and languages. The French government hoped to gain control of the Lao states of the Mekong River Valley and accredited Pavie to the Siamese government as vice consul in Luang Prabang in 1886. During the next five years he travelled throughout northern Laos, winning for France the friendship of local rulers and chiefs and frustrating Siamese attempts to bring the region under control, which was beset by bands of Chinese freebooters (Ho or Haw). From 1891 to 1893 Pavie served as consul general in Bangkok and helped bring about the Franco-Siamese Conflict of 1893, subsequently resulting in all Lao states east of the Mekong River coming under French protectorate.

An amazing online exhibition and collection of researches by the Archives nationales d’outre-mer in Aix-en-Provence is dedicated to the life and work of Auguste Pavie. 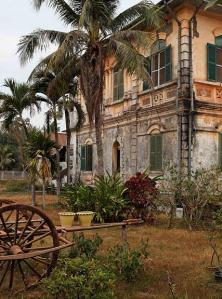 A very useful online resource for the study and research on manuscripts in Khmer and Pali languages is http://www.khmermanuscripts.org/.

This platform is the outcome of a long-term research, digitisation and preservation project carried out by the EFEO in collaboration with Buddhist temples in Cambodia and many Cambodian researchers and monks. The emphasis was on conservation of the manuscripts, preparation of a catalogue and digitisation. The digitisation and online publication of numerous manuscripts makes it possible to study the various facets of the Khmer manuscripts tradition as well as Buddhist and traditional literature in Cambodia.

The Centre for Buddhist Studies, Bristol University, carried out a major research project on the Understanding of Buddhist Death from 2007-11. The outcome of the project are not only numerous publications, but also a range of ethnographic films documenting death rituals in Laos, Thailand and China. The main focus, however, is on death rituals and ceremonies in Laos.

The project was an interdisciplinary collaboration between anthropologists and experts in Religious Studies. It was the first comparative academic study of Buddhist death rituals in these two very distinct cultural areas resulting in the production of ethnographic films. Some of the chosen locations and rituals, such as the festivals for the dead in Laos and China, have not been documented and published before.
An overview and links to the films can be found on the Understanding Buddhist Death Project homepage. 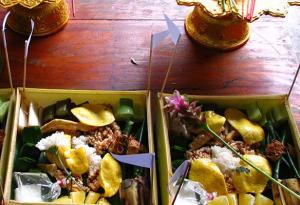 Offering trays at a Buddhist temple in Laos. Source: http://www.bristol.ac.uk/religion/buddhist-centre/projects/bdr/